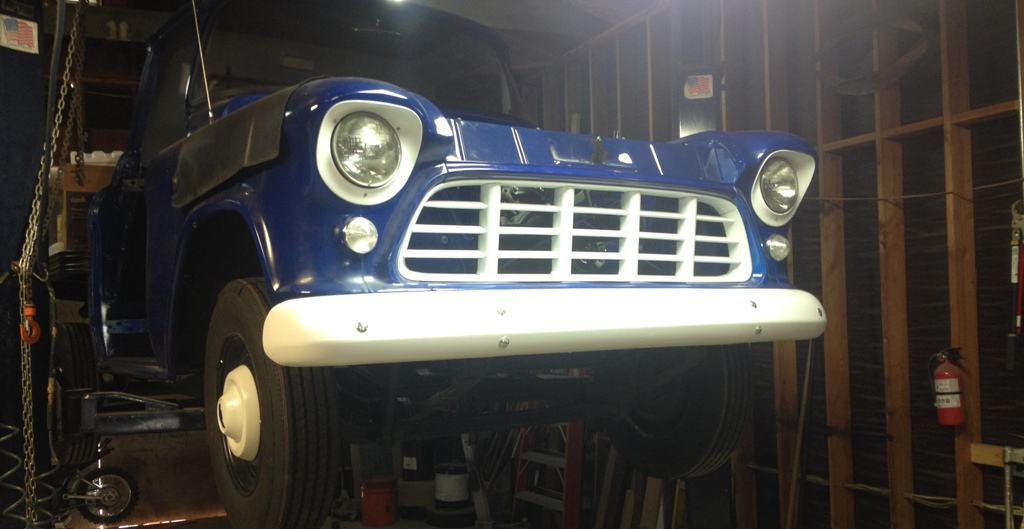 We installed the 235 six without the transmission attached. Even so, we removed all the support structure between the fenders rather than trying to shoe horn it in and bang it against the firewall. Besides, this is a tall truck, and being able to reach in from the front made plumbing and wiring tasks much easier.

We exchanged the original 318 Muncie three-speed  for a rebuilt 319 with the Borg Warner electric overdrive. The transmissions were the same length so we were able to use the original driveshaft. Installations (with the clutch alignment tool) was a snap.

However, after filling it with GL-1 gear oil, which lubricates both the trans and the overdrive, we were surprised to find a leak on the passenger side of the transmission. I sent a couple photos to the rebuilder – All Trans in Greenville, SC – and they identified the culprit as a pressed-in tapered pin that holds the reverse idler shaft in place.

The next step was hooking up all the overdrive relay and kickdown switch wiring, and the lockout cable. It was pretty straightforward, but our kickdown switch location under the gas pedal (on the engine side of the firewall) was a tight squeeze. We hooked up about four feet of wire to each of the four terminals before mounting it.

The terminals on the relay that came with the transmission were labelled different than the original item, so that caused a little head scratching. In order to sort it out and to decide where to locate the relay, we used Google’s Sketchup to create a component diagram.

As you can see, with the 235 six, we decided to mount the relay on the firewall near the battery, coil, and resistor. Of course, at this point we haven’t tested the overdrive. In fact, that’s on the schedule for tomorrow.

But we did fire up the engine after hooking up our new wiring harness and all the other controls and plumbing. We knew the engine ran fine from the test stand, but it’s still a milestone to fire it up in the truck.